Loving God - Loving Each Other 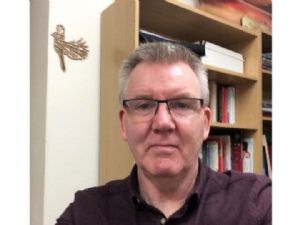 Terry joined us in August 2015 from Streatham Baptist Church in South London where he was the Associate Minister. Previous to that he was a Prison Officer down south and a Parish Minister in the Church of Scotland just outside his native town of Glasgow - not forgetting his time as a policeman with Strathclyde Police over 40 years ago. He certainly brings with him a vast experience of Church, work and real life that is invaluable in his ministry.  Terry is married and has two young sons, as well as a grown up daughter to a previous marriage who works in the offices at the Presbytery of Glasgow. Terry' s heart is to see lives changed through coming to faith in Jesus Christ. His focus is on the preached Word and discipling people to grow and mature in their faith. He does so with a passion and wit that brings the gospel to life. Terry also has a modern approach to worship and has introduced a much more energetic and modern style of musicality to our services.